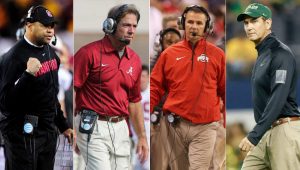 What is it that marks greatness?  What factors into a decision that someone is the best?  In sports, it’s relatively easy from year to year to determine who the best is based solely on who is left standing in a championship match. In the NFL, the best team is determined by the team who wins the Super Bowl. In golf, the best is generally regarded as the one who wins the most events. But, how do you gauge someone as the best by legacy? For example, how would you grade the best coaches in college sports?  No single team has won every championship during their existence in any given sport. Many teams have had years of outstanding success followed by incredible failure, many have also had this the other way around. So, how is it that one can measure a college coach on greatness when there are so many different factors to consider? Well, as mentioned earlier, one can consider championships. As good a place to start as any, the number of championships a college coach holds is a telling marker of their greatness in their given sport.

Since the inception of the NCAA, no college coach has won more football championships than Alabama’s Paul William “Bear” Bryant. Once a player on the Alabama team, Bryant eventually went on to coach the Crimson Tide to six national titles between the years of 1961 and 1979. Before coaching Alabama to six national titles, Bryant also coached at the University of Maryland, University of Kentucky and Texas A&M University before returning to his alma mater where he ended his career in 1982. Bear Bryant retired with a career record of 323-85-17. His 323 career wins rank third all-time in NCAA football history.

The most wins is awarded to Joe Paterno, who claims 409 career wins – all with the Penn State Nittany Lions. In the span of coaching from 1966 to 2011, “JoePa” led Penn State to 37 collegiate Bowl appearances – the most in NCAA history – and won 18 of them (his Bowl record was 24-12-1 before NCAA sanctions took place). He also won 2 national championships with the Nittany Lions in 1982 and 1986. He also coached Penn State to five separate undefeated and untied seasons during his career. For his efforts and continued dedication to Penn State, Joe Paterno was also awarded a hefty paycheck of a shade over $1 million before his contract was terminated during the 2011 season.

As impressive a resume as that may be, especially with 409 wins in 45 seasons, there are several head basketball coaches who make that number look rather paltry. And the most impressive is likely a name you have not heard before: Harry Statham. There are Division I greats such as Mike Krzyzewski, Bob Knight, Pat Summitt, and Jim Boeheim, and the argument could be made that their involvement in Division I outweighs the accomplishments of Harry Statham, the head coach of McKendree University, a Division II private liberal arts college in Lebanon, Illinois. While the previously mentioned coaches all sport 900+ wins and various points of national championship contention, Statham is the only active college coach (having coached now for 50 seasons) to garner over 1,100 career wins. And just the same as Joe Paterno at Penn State, Statham has earned all of his wins with McKendree, posting an impressive .691 winning percentage with a career record of 1,110-497 with the Bearcats.

All things considered, it is difficult to pin down greatness to one category. While these are a few of the more prominent names in collegiate sports, there are a number of others to whom we could give heavy consideration. Greatness isn’t built solely by championships, or by an overall career record, or even by the amount of money a coach has earned. But, considering the metrics we have to work with, they are certainly a good start for picking a few standouts.