There is nothing more invigorating than watching a team comeback from behind in a big game.

It is something fans enjoy and want to see as much as they wish to see a car crash at a NASCAR race. So, what are some of the best comebacks in sports history? 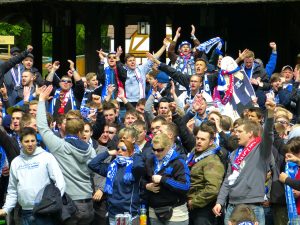 It doesn’t get better than this in the world of baseball. The Boston Red Sox were notorious for not being able to win and having a “curse” on them in the playoffs. Well, this was one way of breaking through the shackles. They were down 3-0 to their arch-rivals the Yankees and came all the way back to win it in game 7.

The Michigan State Football team didn’t do that. They decided it was time to make a comeback and that is what they did. They rallied all the way back to win it 41-38 leaving their opponent in shock. It is still recorded as the biggest comeback in college football history.

Just like the Boston Red Sox, the Philadelphia Flyers were in a real pickle. They were trapped in a 3-0 deficit against the strong Boston Bruins. Well, they were able to mount a complete comeback leaving the Bruins stunned as to how they could lose.

These are the best comebacks in sports history, and each one has changed the definition of winning for those teams. It is all about recognizing never to give up and continuing to play hard until that final buzzer goes. This is the beauty of a team sport and how it works to bring people together.