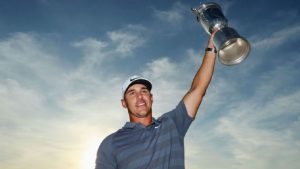 At first glance, you would like Brooks Koepka was a professional hockey player who was looking to shoot a few holes on his day off. This former basketball and baseball player, who openly admitted that he teased the golf team in high school, became the first man since Curtis Stone in 1989 to win back to back U.S. Opens.

Koepka, a child of the Tiger Woods era, proved that golfers are more than just prep school nerds and are true athletes. He took up golf after an injury sidelined him from playing baseball at his high school. He became successful in Europe which led him to win his first U.S. Open last year. However, he was sidelined from golf with a wrist injury which prevented him from competing in the Masters. Depressed from being injured, he sat and watch golf at home and wondered why none of his golf colleagues texted him (other than Dustin Johnson, Phil Mickelson and Bubba Watson). He worked hard and felt determined to make his big appearance at this years U.S. Open. And boy did he!

Round 4 he was paired with his good friend and former roommate Johnson. Johnson had a disastrous round 3 shooting 77. Koepka never lost his cool. He birdied the par 5 16h hole and managed to only bogey on the last hole preventing a playoff with Fleetwood (who shot an incredible 63 in Round 4).

Koepka is the first in hopefully a long line to show that golf is indeed a real sport and athletes are the future.