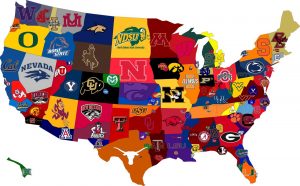 There are several metrics by which one can measure greatness. In the case of collegiate sports, there are probably too many to consider. Between the variety of sports that each university offers and the storied dynasties associated with each and every collegiate sport, narrowing down all of the colleges to a handful that are the most well-known for their collegiate sports programs may prove to be a daunting task. But while the schools themselves and the factors surrounding them are numerous, there are several standouts even among a nation’s worth of schools to choose from.

When you think of Texas (and many southern states, for that matter), you generally think of football. The Longhorns at the University of Texas at Austin have quite the history of excelling when it comes to college football, and this is especially noted in the slew of NFL players they seem to pump into the draft year after year: whether it be running back Jamaal Charles, the all-time leader in rushing yards for the Kansas City Chiefs, or hard-hitting Kenny Vaccaro of the New Orleans Saints. Consistently, the Longhorns are in contention for one Bowl game or another, and they’re no slouch when it comes to their other sports programs either. Since 2003, the Texas basketball team has made 3 appearances in the Elite Eight, advancing into the Final Four in one of those years, and they have graced the NBA with the talent of Kevin Durant. The baseball team has appeared in the College World Series on 33 different occasions. The entire sports program at Texas also nets over $56 million per year, on average. Which says they must be doing something right.

Much like Texas, the University of Alabama is best known for their football program, especially since the advent of Coach Nick Saban. The Crimson Tide have won 4 national titles and six division titles since Saban took the reins, making them one of the most successful programs in recent history. But, their success doesn’t stop there. Alabama’s baseball and softball teams made solid runs toward their respective College World Series last year, and their gymnastics and golf teams each came in third on the national stage. Stemming from all this recent success, it’s no surprise that Alabama nets a hair under $50 million per year.

While the University of Georgia has hit a bit of a slump in what are regarding as the keystone sports of late (mainly football and basketball), they seem to clean up rather nicely for much of what many might consider the more obscure sports in NCAA. In 2015 and 2016, the swimming and diving team went from runner-up to national champions. The women’s gymnastics team had won five consecutive national titles prior to 2010. The baseball and softball teams have seen some success in the 21st century. All of this translates to a check to the tune of about $35 million per year on average – not exactly peanuts, especially when the more popular programs in the nation’s eyes are currently on a downward trajectory.

But, by far, one of the most successful sports programs – if not THE most successful – lies within the University of Florida. In the past three years, the Gators have sported 31 top 10 finishes across all of the sports that the college offers. They have also taken home 4 national championships since the turn of the millennium (granted that only ties Nick Saban’s accomplishments at Alabama, but nobody’s perfect). And when your college ranks eighth in the country generated revenue – after thinking about how many Division I schools are in the country – that’s not too bad either, with an average of about $43 million per year.

These are only a few out of many storied universities, and several honorable mentions also exist. But, as difficult as it is to succeed in one sport when the competition spans into well over a hundred national teams, to be successful in multiple sports is nothing short of improbable and awe-inspiring.