In college football, the rivalry between Michigan and Michigan State is one of the most famous. The rivalry has heated up since Michigan State reached elite status and is no longer playing the little brother to the University of Michigan. 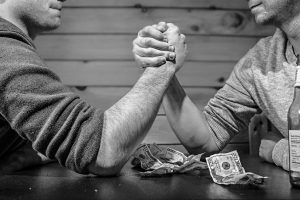 In college basketball, the biggest rivalry is between Louisville and Kentucky. This is a fierce competition and Louisville’s recent postseason ban hasn’t seemed to dim the energy. In fact, the off-the-court antics of the Cardinals players have actually fueled the fire. It is quite entertaining to listen to fans bickering online about whose team is better.

Another intense rivalry between college football teams in the feud between Alabama and Auburn. For years, Alabama was the top dog, then in 2014, Auburn’s Iron Bowl win turned the tables for a few years. Now, it appears Alabama may be stepping up their game and ready to take over again as it wins the fourth national championship in the last seven years. It remains to be seen if Auburn can bring some energy to the gridiron and take over the Dogs in the next couple of years for the top spot.

When it comes to college basketball, the rivalry between Duke and North Carolina is fierce and getting fiercer. The Blue Devils took the National Championship in 2015, but the Tar Heels are consistently ranked as one of the top teams in the country.

All of these are big rivalries, but they can’t hold a candle to the long-lived battle between the Michigan and Ohio State football teams. There are no two other college teams that hate each other more. When these two compete for conference championships, tempers certainly flare.

For some great college basketball action, please check out the following video!