Ask any cheerleader if what they do is a sport and watch the reaction. Almost every cheerleader who ever topped a pyramid or executed a back handspring series across a gym floor will get fired up when someone implies cheerleading is not a sport. For years, athletes and coaches of other sports have talked down about cheerleading. Even though elite cheer teams are a combination of gymnasts, long-jumpers, and pole vaulters, there are many who continue to believe cheerleaders aren’t athletes. I’m not going to say you need a lawyer to make an argument that cheerleaders aren’t athletes, but I’ll put their website here.

This is about to change, however with the recent decision by the International Olympic Committee to provisionally recognize the International Cheer Union as the sport’s governing body. This is the first step in a long process that may culminate in cheerleading being recognized as an Olympic sport. 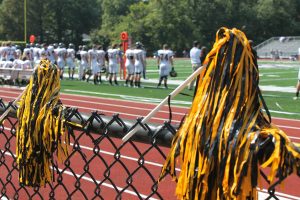 Cheerleading has long been a competitive sport. It is recognized by the National Federation of high school state associations, Pop Warner, the NCAA as a competitive sport and recognition from the International Olympic Committee will put the issue to rest, once and for all.

Anyone who agrees that judged sports such as diving, figure skating or gymnastics are sports, should also agree that cheerleading is a sport, too. Cheerleading competitions are much like gymnastics or figure skating competitions. Certain skills or moves are given a value. There are deductions when a team member falls or there is a mistake in the routine. Penalties are assessed if the team goes out of bounds. These rules are all very similar to other judged sports which is why there is really no question about cheerleading being a sport.

Most Americans consider cheerleading to be a national phenomenon, but it has spread throughout the world. There are 110 different federations in the International Cheer Union and 70 countries had teams which competed in last year’s World Cheerleading Championships.

Yes, cheerleading is a sport. It might just become an Olympic sport in the near future.

To keep the debate going, please watch the following video: