There have been a lot of good quarterbacks in NFL history. Figuring out which one was the best is a complicated equation. It ultimately depends on what you are looking at when you are trying to determine which one is the best of the best. Below, we will be going over some of the main things that you are likely going to look at when you are trying to decide. 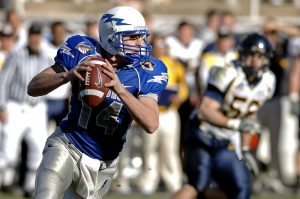 Figuring Out Who Are The Best Quarterbacks In NFL History:

One of the main things that you are going to likely look at when you are trying to figure out which quarterbacks are the best is individual stats. This is likely going to be one of the first things that you consider because it dictates which QB’s were able to change the game by themselves and what they were able to do by themselves. This includes a variety of things including passing yards, rushing yards, passing touchdowns, rushing touchdowns, passer rating, completion percentages, passing yards, and more. While these are excellent things to look at, there are other factors at play that should be considered as well.

Because a quarterback is arguable the most integral component of a successful team, team accomplishments should be looked at as well. For instance, how can the greatest quarterback of all time have never brought his team to the playoffs or won a playoff game? Perhaps his team was so bad that he never had a chance? This is a good question that needs to be asked. With that being said, most of the great quarterbacks or those considered great have achieved a high level of team performance on the biggest stage. Therefore, the number of NFL super bowl appearances and victories has to be at least considered.

Who is going to be the next great quarterback? Will it be Jared Goff in Los Angeles, or Jameis Winston in Tampa Bay? We can’t wait to find out.

With that in mind, please have fun watching this video about the best quarterbacks ever: