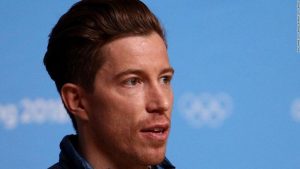 For some reason this year I’ve been heavily invested in the Winter Olympics. In 2016, I didn’t even watch a single event in the Summer Olympics, yet here I am two years later ignoring my regularly scheduled television to watch Alpine Skiing. But because I have been so obsessed, I was able to see Shaun White earn his history third gold medal in the men’s snowboarding halfpipe.

It was an absolute nail-biter. During White’s first run he performed several tricks earning him a pretty solid score of 94 points. However, Japanese snowboarder Ayumu Hirano during the second run of the course beat White’s score with a 95. During White’s second he fell, meaning that going into the third run of the event, Shaun White had to have a flawless run. He was in charge of his own destiny. I held my breath and he did his third one. It looked perfect to me but what do I know? When the scores came in – he got a 97 and earned his third gold medal.

And during today’s political climate you have two lines of thought regarding these sexual misconduct accusations. In light of the #MeToo movement, many are wondering why these allegations were not looked into the Olympic committee and how he could have possibly been able to play on the Olympic team in Pyeongchang. However, you also have those who accuse Zawaideh of seeking her 15 minutes of fame against the sports celebrity.

My only response to this is goddamnit Shaun White. Everyone is considered innocent until proven guilty however the way our media works in our country, everyone is guilty until proven innocent. This lawsuit that was filed in 2016 settled out of court. We will never know what Shaun agreed to or not in the settlement. However, when he was asked about the allegations after his gold-winning Olympic run, Shaun responded to an ABC News reporter “Honestly, I’m here to talk about the Olympics, not gossip and stuff.”

Now, A.J. Perez, the lawyer for Zawaideh is saying that Shaun breached the contract and has minized the problem of sexual harassment that is happening within our country. He is also calling for the United States to do their due diligence and do a proper investigation.

Shaun White plans on competing in the skateboarding program at the 2020 Summer Olympics and defending his snowboarding gold medal at the 2022 Winter Olympics. If he cannot get this behind him, and in the past, then he might lose his hero status with the country.