Both tennis and table tennis, or ping-pong, have been around for a long time. But which sport came first?

Table tennis began in Victorian England as an after-dinner parlor game for the upper class. Legend has it that its true origins began with British military officers stationed in India during the 1860s or 1870s, with a row of books standing in a row in the center to serve as the net, and two books used as paddles to volley a golf ball back and forth. 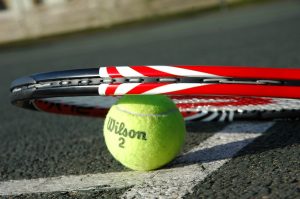 The game was known by several names, including whiff-whaff and ping-pong (which was a widely used name long before it was trademarked in 1901 by J. Jaques & Son Ltd). When Jaques sold the rights to the name ping-pong to Parker Brothers, the game maker vigorously enforced the trademark, forcing other game manufacturers to call it table tennis.

Tennis, on the other hand, has a much longer history, although the game went through many iterations before becoming the “game of kings” that it is known as today.

But it wasn’t until 1500 that a version of today’s racquet came into use�”a wooden frame strung with sheep gut. It was even longer ago in 1625 that Hampton’s Court, a court similar to today’s courts, was built in England.

The game’s popularity declined almost to obscurity in the 16th century, but was revitalized when a vulcanization process for rubber made balls bouncier, and the game began to be played on outdoor courts with nets, requiring new sets of rules to be implemented.

The first Wimbledon tournament was held in 1877 by the All England club, using a rectangular court and rules that are very close to the way tennis is played today.

Since ping-pong was already in use by the time Wimbledon was held, it could be argued that ping-pong predates modern tennis. But the essentials of the game of tennis were around long before that, so many experts argue that tennis is the older of the two games.