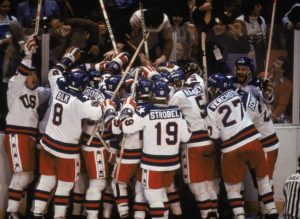 Many people enjoy sports for the competitive nature and atmosphere that it provides. Physical or not, the entertainment from watching two people or teams pitting their physical skills and mental prowess against each other to see who is better in their respective arena can be one of the more thrilling experiences to witness as a sports fan. Something that makes these experiences all the more enjoyable and memorable is the occasional ascension of the underdog in particular contests – regard the Biblical showdown between David and Goliath. Granted, the stakes were higher in that case, but the point still stands. Witnessing a down-to-the-wire, back-and-forth slugfest between two opponents can make for a very thrilling experience. Witnessing an underdog topple a favorite in dramatic fashion can increase the thrill of the event exponentially by itself.

In 1980, the Winter Olympics were hosted in Lake Placid, New York. And for the national ice hockey team representing the Soviet Union, it appeared as if it would be business as usual. They were a heavy favorite to take the gold medal, and why shouldn’t they be? They had won the gold medal in the four previous Winter Olympics (dating back to 1964) and hadn’t lost a single Winter Olympic game since 1968. While IOC rules dictated at that time that winter sports teams were to be made up of amateurs, there were those who suspected that the Soviet team was actually comprised of athletes paid by the state to train on a full-time basis, explaining the reason behind their long success. In fact, since 1964, they had a cumulative record of 27-1-1 and had outscored opponents, 175-44, during that time period. Meanwhile, the United States team, coached by Herb Brooks, had their tryouts as late as the summer of 1979, with only one player returning from the 1976 team. Apart from this relatively short time period to come together as a unit, the United States team of the 1980 Winter Olympics was also the youngest in team history, averaging out at 21 years old. The fact that they were able to keep pace at all with an overwhelmingly favored Soviet Union team is astounding by itself.

The game was a single-elimination style contest in the first portion of the medal round, a round for which Sweden and Finland also qualified. The United States had advanced from their group of exhibition matches, sporting a 4-0-1 record and beating powerhouse Czechoslovakia in an impressive 7-3 victory. The Soviet Union swept their group for a 5-0 record, their closest games still decided by 2 goals. It looked as if the Soviet team would remain unstoppable, especially without a competitive Czechoslovakia team to face. But the United States would show a grit and physicality that nobody seemed to expect.

After the first period, the United States and the Soviet Union were tied, 2-2. But the Soviets dominated the second period, outshooting the United States with 12 shots on goal to 2, and taking a 3-2 lead into the final period of the game. The United States, in a surprising turn of events, scored two goals in the first 10 minutes of the 3rd period to take a 4-3 lead. The Soviets, stunned at this, appeared to begin playing with less discipline. And the United States, oddly enough, continued to play offensively and aggressively to keep the pressure on the Soviet Union. The Soviet team began to shoot in a panicked frenzy, but American goalie Jim Craig managed to keep his composure long enough for Al Michaels to deliver the historical commentary in the closing seconds of the game:

“Do you believe in miracles? Yes!”

Thus, the United States team, in a stunning 4-3 victory over the Soviet Union, had completed what would later be known as the Miracle on Ice. It was their ticket to the gold medal game, a game in which they defeated Finland, 4-2. The Soviet team later won the silver medal by defeating Sweden, 9-2